Could the Volt Jump-Start GM?

Could the Volt Jump-Start GM?
Automaker Hopes Battery-Powered Car Will Be A Game Changer. Critics Say It's Too Expensive. 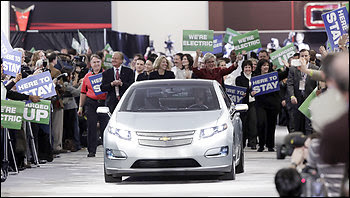 General Motors frequently holds up the Chevrolet Volt as a symbol of its future and a testimony to its ingenuity when it asks Washington officials for billions of dollars in federal aid.

So prominent a role has the battery-powered car played in discussions that when members of President Obama's auto task force flew to Detroit earlier this week for a series of meetings, they decided to take it for a spin.

Their impression, according to an administration official: The Volt certainly shows promise, but it is no panacea for what ails GM in the near term.

The problem is GM will likely have to price the vehicle far higher than a comparable family car with a gas-powered engine, putting it out of reach for many consumers, particularly if oil prices remain low.

Further, the rollout comes as rivals roll out partial-electric hybrids at a fraction of the cost.

With the ability to drive 40 miles on a single charge, the Volt aims to usher in a new era of gasoline-free daily commutes when the car debuts in late 2010 in the Washington area and San Francisco, GM officials say. But some analysts and government officials predict the car may be initially priced up to $40,000, and possibly more, because of its costly lithium-ion batteries.

"Over time the costs will come down and be competitive with conventional cars," said Bob Lutz, GM vice chairman for global product development, who has taken on the Volt as his last project before retirement. "Although right now that's not the case."

Meanwhile, hybrid fuel-efficient cars are getting cheaper as the competition for alternative-fuel vehicles heats up. Honda's Insight LX, a traditional gas-electric hybrid that goes on sale this month, will start at $19,800. Chinese battery manufacturer BYD sells a plug-in for $22,000 and plans to enter the U.S. market in 2011.

Toyota plans to start testing a plug-in, lithium-ion version of its Prius at the end of this year. Chrysler has created several plug-in electric prototypes. And Ford has announced plans to build a family of electrified vehicles by 2012.

"Consumers are going to have a great choice," said Jim Lentz, Toyota's top U.S. executive. "That's what makes it a horse race."

The Volt was supposed to be a game changer for GM. With it, the beleaguered automaker burdened with the perception that its products are out-of-touch hopes to leapfrog more cautious rivals.

Lutz makes no apologies for GM's strategy, even though he admits that putting the Volt's battery technology into GM's upscale Cadillac line might have made the initial pricing more palatable. After all, affluent customers might be willing to brave the inevitable first-generation glitches, since this would likely be their second or third car.

"Doing it in a Cadillac would have made it financially easier to do, but on the other hand we wanted something that's boldly applicable," he said. "Our big 5-million-unit global path is Chevrolet. With the Volt we can sell it around the world."

California automakers Tesla Motors and Fisker Automotive are speeding exactly in the opposite direction. Both sell electric sports coupes priced above $88,000 -- targeting well-off, environmentally minded buyers such as former Secretary of State Colin Powell and Black Eyed Peas frontman will.i.am. In a few years, the two carmakers hope to come out with a mass-market version.

Fisker chief executive Henrik Fisker likens his business model to the one for flat-screen televisions. At first they were expensive, $20,000 status symbols, but in a few years companies were able to perfect the technology and sell in large enough quantities so that the average family could pick one up at Best Buy for under $1,000.

For now, the small volumes of cars being produced means that there are few suppliers, and little competition to drive down prices.

Still, the Volt has inspired a legion of fans -- the so-called "Volt Nation." Lyle Dennis, creator a popular Volt news Web site, stirred up such a demand for the car that GM invited him to Detroit to talk to top executives half a dozen times.

"Electric cars are not necessarily new," said Dennis, a New Jersey neurosurgeon. "But the idea that a major automaker is going to produce them on a mass scale, now that's something new. This could really make a difference."

In a way, this is a shot at redemption. A decade ago GM discontinued its first electric car, called the EV-1, and terminated all leases. The outrage that followed was a public relations nightmare and the subject of a scathing documentary, "Who Killed the Electric Car?"

As GM's financial woes grow, the Volt has become a source of company pride.

At GM's first press event at the annual Detroit auto show, out marched Michigan Gov. Jennifer Granholm (D) with the Volt silently gliding in front of her, past the cheering masses and bobbling signs reading "We're Electric" and "Here to Stay."

A few days later, on the same stage, GM chief executive G. Richard Wagoner Jr. declared that the company would be assembling the Volt's battery packs at a new plant in Michigan -- a victory for Granholm's relentless push to plug her flagging state into new alternative energies. The $30 million plant holds the promise of bringing new high-tech, "green" jobs to a state that has the highest unemployment in the nation.